I still haven’t found a good way to animate things in R. Sure, there are packages like {gganimate} that will interpolate your frames and stitch them together in a gif. But the results are always… underwhelming.

This weekend I decided to up the gif game. Instead of settling for a small, low frame rate image, I decided to try my hand on rendering a movie using R. While I have some more esoteric projects in mind, I chose to start with the classic Lorenz attractor.

I need a plan

Here’s the plan. I want to create a movie which shows some nearby points spread out over the full space of a Lorenz attractor. I’d like to make a proper movie with sharp graphics and fluid motion. I want to write all my code in R, and I’d like it to render in five or ten minutes on my 4 core i5 laptop.

First, I need to create each still image. Let’s make a function to generate the path of a single particle through the Lorenz system.

I won’t go over the gritty details of {deSolve} – in short it generates the path defined by a differential equation. I could have chosen the simpler Euler integration to do this. On the other hand, the different pieces of the differential equation is clearer this way, once you get your head around what it does. If you look up the algorithm for the Lorenz attractor, I’m sure you’ll recognize the important bits.

generate_lorenz() will generate the path of a single point. Since I want to track a bunch of them, I need to run it for each point:

There’s already a bunch of decisions embedded in the code above:

As you might expect, I didn’t set these parameters on the first attempt, but went back and forth with different settings until I was happy with the results. For example, after having run the animation a couple of times I chose a low-speed starting point to have a not too-jerky start to the animation. Playing around is my way of figuring this out.

With 562500 point at my disposal, time to get some digital ink on disk. I write a function to plot a single frame. This turned out to be super useful when calibrating the parameters above: with this function I would for example plot frame 250 to see how the animation would look 250/25 = 10 seconds in.

I plot the Lorenz attractor only in the (x, y) plan. Adding some rotation to it would make the movie more interesting. For the purpose of learning the technical details of making an animation this is enough. 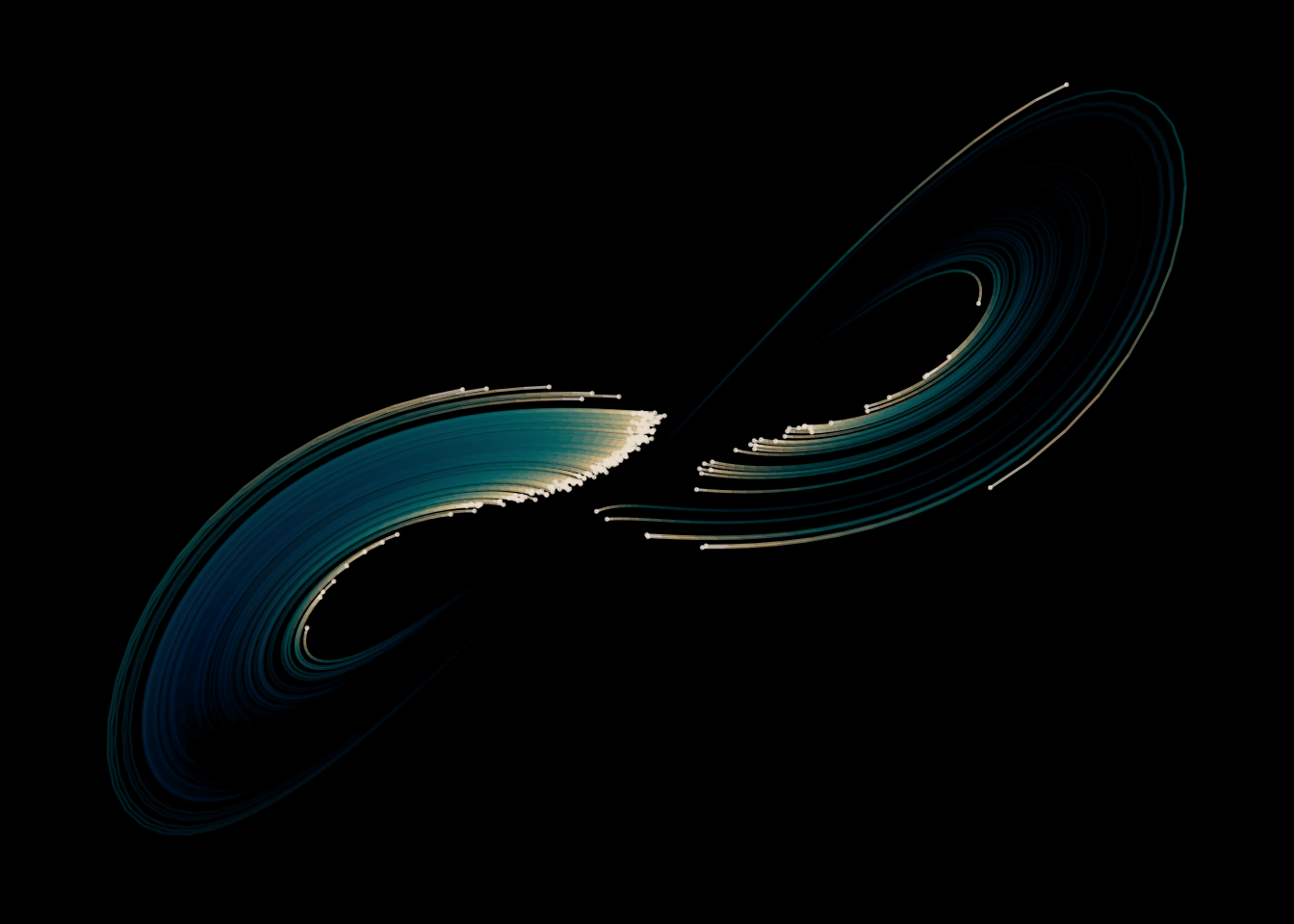 I leave a 30 iteration trail behind each point as a geom_segment(). The alpha fades out to more transparent and the color fades out to darker towards the tail. I add a small geom_point() to each point’s head. I set the x and y limits of the axis to the whole range of visited points, to make sure the coordinates stay in the same place throughout the animation. As for alpha levels and color schemes, you guessed it: tinkering. The palette is from Colourlovers – an amazing page to find cool palettes, which also has a {colourlovers} package to work with in R.

Now, time go generate a bunch of frames! I’m looking to plot 90 * 25 = 2250 of these, and I don’t want to do it one at a time. There’s a bunch of packages to do parallel computing in R. I prefer to use {future} and {furrr} with tidy data, but sometimes they just don’t seem to play nicely with me (probably my fault). Today, I’ll go with parallel::mclapply(), in a nice wrapper that gives a progress bar.

In short: kick off one process on each core and have each render a frame at a time. I save each plot to a directory I created (~/tmp/anim) as a 3840x2160 png image. (Yes, again tinkering to get the settings right).

Some six minutes later, I’ve got 2250 files adding up to just short of 3 GB waiting for me. 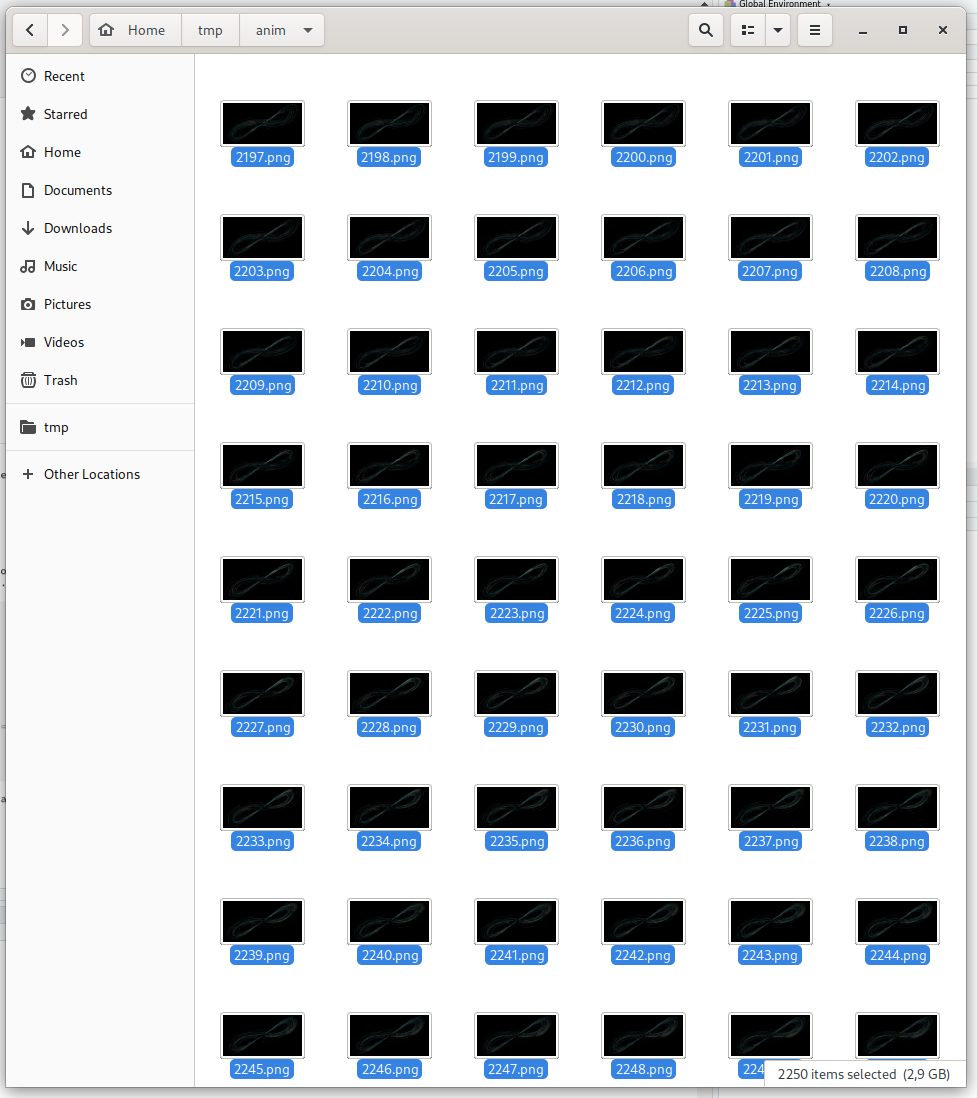 Finally, I stitch the images together into a 90 second clip using ffmpeg. Here’s where I spent a ton of time on Google trying to get the final video to look sharp. A few important settings I came across:

Another three or four minutes later, I have a video waiting for me – a good 360 MB in size.

You can view the final result on Youtube. Don’t forget to pick HD 1080p quality now that my poor computer struggled so hard for it!