Book Notes: Tell Me a Story by Roger Schank

I stumbled on Roger Shank's Tell Me a Story in a flea market. I'm not sure what made me pick it up, but it turned out to be one of these surprises that sometimes happen to you. 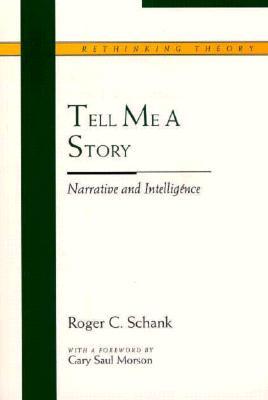 This is my second read of the book, which in itself is quite unusual. Last time I read it, about five years ago, I remember being blown away by the first chapter, while the rest made less of an impression.

The premise of the book is that stories are our central unit of understanding, communication and memory. As an AI researcher, the author argues that intelligence meant for humans ought to center around this unit as well.

There is no computer science and very little AI in the book. Instead it investigates stories and how we use them. I can't speak to the scientific rigor of the contents. There are no references and very little talk about science. I read it as a possible model of human interaction and understanding, useful to generate experiments of behavior from.

At least two aspects of intelligence are critical for either humans or computers. One is have something to say, to know something worth telling, and the other is to be able to determine the others’ needs and abilities well enough to know what is work telling them.

Mind opening books are both good in and of themselves, and happen to be read when the reader needs it. When the student is ready, the teacher appears. How can we increase the signal/noise ratio of the latter? Doing so is a big chunk of what the book defines as intelligence.

An understander of the world is an explainer of the world. … You have to explain to yourself exactly why the people you are hearing about or observing are doing what they're doing.

Much effort is spent to figure out why people do what they do. Much (most) miscommunication is the receivers mistaken interpretation of the senders intention? This book argues that stories, individual and cultural, make us expect behavior from our stories. When our stories differ from the other's, misunderstandings will happen.

Life experience means quite often knowing how to act and how others will act in given stereotypical situations. That knowledge is called a script.

We don't analyze others’ behavior or stories very often. Instead we reflexively play back pre-programmed, tuned and tested sequences of behavior. Going to other places in the world gets us in a situations where we lack valid scripts.

Predictable things that we have lived through many times, or things that lack significance to us, are best ignored (or acted on via low-cost scripts). We pay attention to what interests us.

We can tell people abstract rules of thumb which we have derived from prior experiences, but it is very difficult for other people to learn from these. We have difficulty remembering such abstractions, but we can more easily remember a good story.

To understand a new concept, I've found that examples are a necessary and primary unit of understanding. I tend to talk in terms of ready-analyzed principles, but ought to try talking more in stories and abstain from digesting it into a conclusion. It is more likely to be useful if the listener can pick up what they need from a story than I am making an appropriate conclusion for them; especially so since I might be all wrong about what they need at all.

The book argues that we tell stories in order to make sense of theme. Each retelling we do of them, we prune and crystallize the story. The first telling of the story will define how we remember the event, and each subsequent telling changes it. As I've read someplace else: we don't remember an event, we remember our last memory of it.

Understanding usually means being able to add information to memory.

When we respond to somebody telling us a story with another story that the other part recognize is related to theirs, they feel heard and understood.

We tell stories in order to remember them

By telling the story, we both express the gist of it as well as get feedback in our structuring.

If you have a bad experience, you should compose the story, tell it once, and never tell it again. The sooner you tell a story, the sooner you can begin to forget it – by never telling it again.

I will linger on a bad experience until I'm satisfied with either how I've told it or how it has been received. I'm not sure I believe (or understand) this argument; if it is true that the telling is the key point, wouldn't writing it in a diary be sufficient? Is it?

On the other hand, dwelling on a wrong having been done to oneself also leads nowhere…

Story skeletons can have an important effect on memory. Since we see the world according to the stories we tell, when we tell a story in a given way, we will be likely to remember the facts in terms of the story we have told.

By stepping back and abstract my internal stories about a situation, I should be able to identify either possible solutions or potential blind spots. It is definitely a danger to fit actual, messy events into an archetypal story, since the messy nuances this lets one forget often holds the key to mutual solutions.

People have difficult making decisions if hate know that they will have trouble constructing a coherent story to explain their decision.

This seems to be a key feature of an ambivalence phase of change: to figure out a single story that fits the data and desires. Interesting is that coherence here also includes acceptability.

We must construct a story before we take an action to ensure that the action we are about to take is coherent. Further, if the action is in any way incoherent, we make it more sensible by putting it into a framework that is acceptable to those who hear the story. In other words, if what we do fits into a well-known, socially acceptable story skeleton, then we can believe that we have acted properly.

Beware of what stories I tell myself for things that matter. The deeper I get commited to a story, the more I become forced to follow it through its logical conclusion and end. If for example a relationship story forms where I am the victim, the conclusion is to end the relationship. Stay clear of forced moves.